Did you know that every month has a birth flower and that, just like birthstones, each one has its own special meaning? Here’s our guide to the different birth flowers by month and their symbolism. It comes in really handy when choosing perfect birthday flowers to send to this special someone. Make sure you opt for a bouquet featuring their birth flower!

Loved for its ruffled petals, wide array of colours and long vase life, the carnation is the birth flower for January. It’s an incredibly fitting choice too, as carnations are one of the few flowers that can thrive in cold weather.

Despite being seen, somewhat undeservedly, as a filler flower in modern times, the carnation had grandiose beginnings. Indeed its scientific name, Dianthus, means ‘flower of the gods’ in Greek and its common name is believed to be derived from the word ‘coronation’.

With a history dating back thousands of years, January’s birth flower is steeped in religious symbolism too. In Christianity it is believed that the first carnation bloomed when Mary’s tears hit the earth as she wept for her son Jesus. It’s no surprise then that today the flower has become a universal symbol of motherly love, making it a popular choice for both Mother’s Day and International Women’s Day.

The meaning of carnations varies from colour to colour, but is generally accepted as ‘devotion’. Because of this it is said those born in January make loyal and dependable friends. 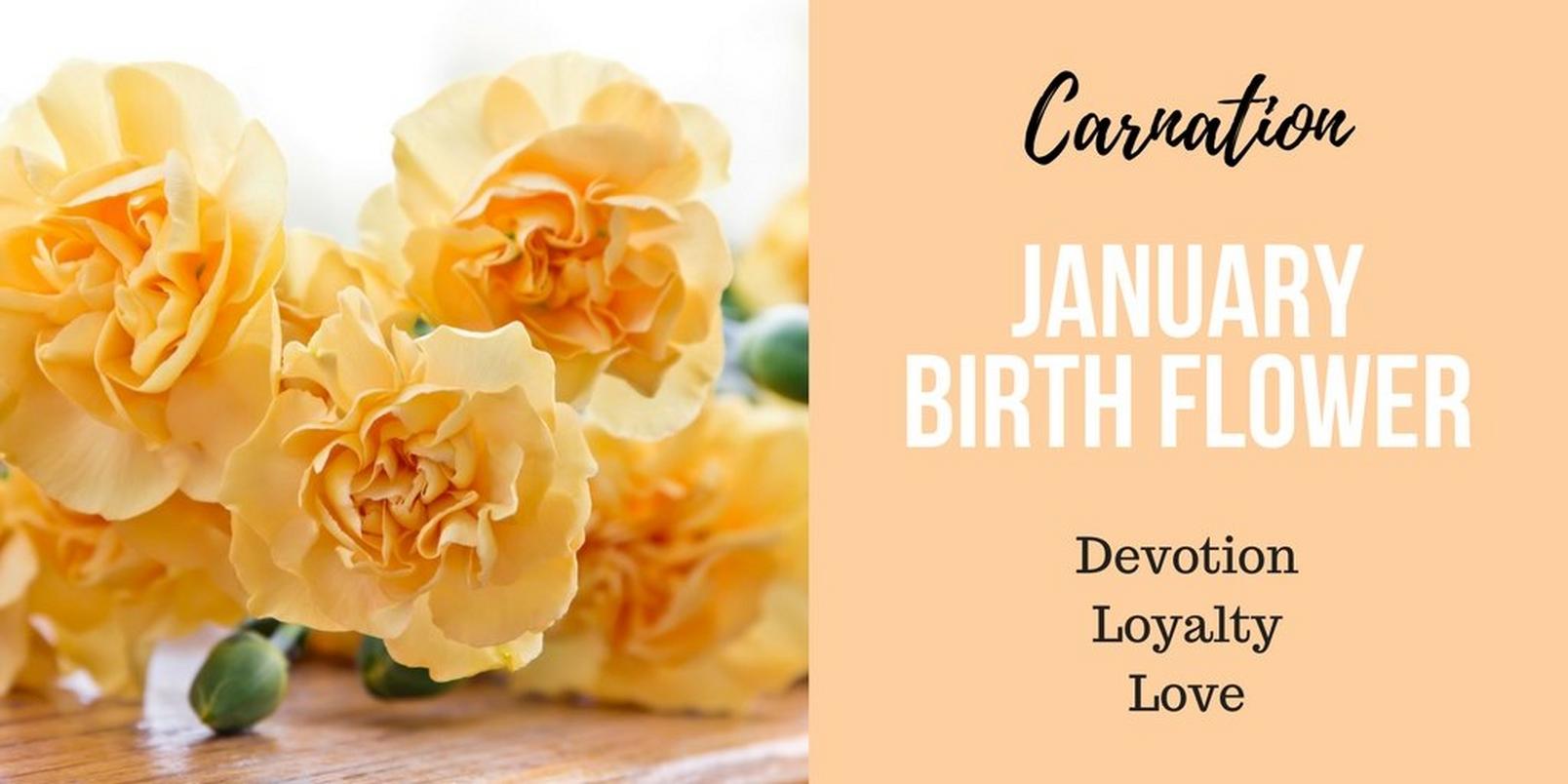 With Valentine’s Day celebrated on the 14th, you could be forgiven for assuming that February’s birth flower is the rose. While it might seem like the obvious choice, the birth flower for February is in fact the violet. These vividly-coloured flowers have been around for centuries, with the ancient Greeks first cultivating them for use in herbal remedies and to sweeten wine. The flower has distinctive heart-shaped petals which is perhaps why they were once used in love potions.

Violets are said to represent faithfulness, virtue and modesty, which explains where the expression ‘shrinking violet’ comes from. Because of this, those born in February are said to possess the qualities of humility and honesty. 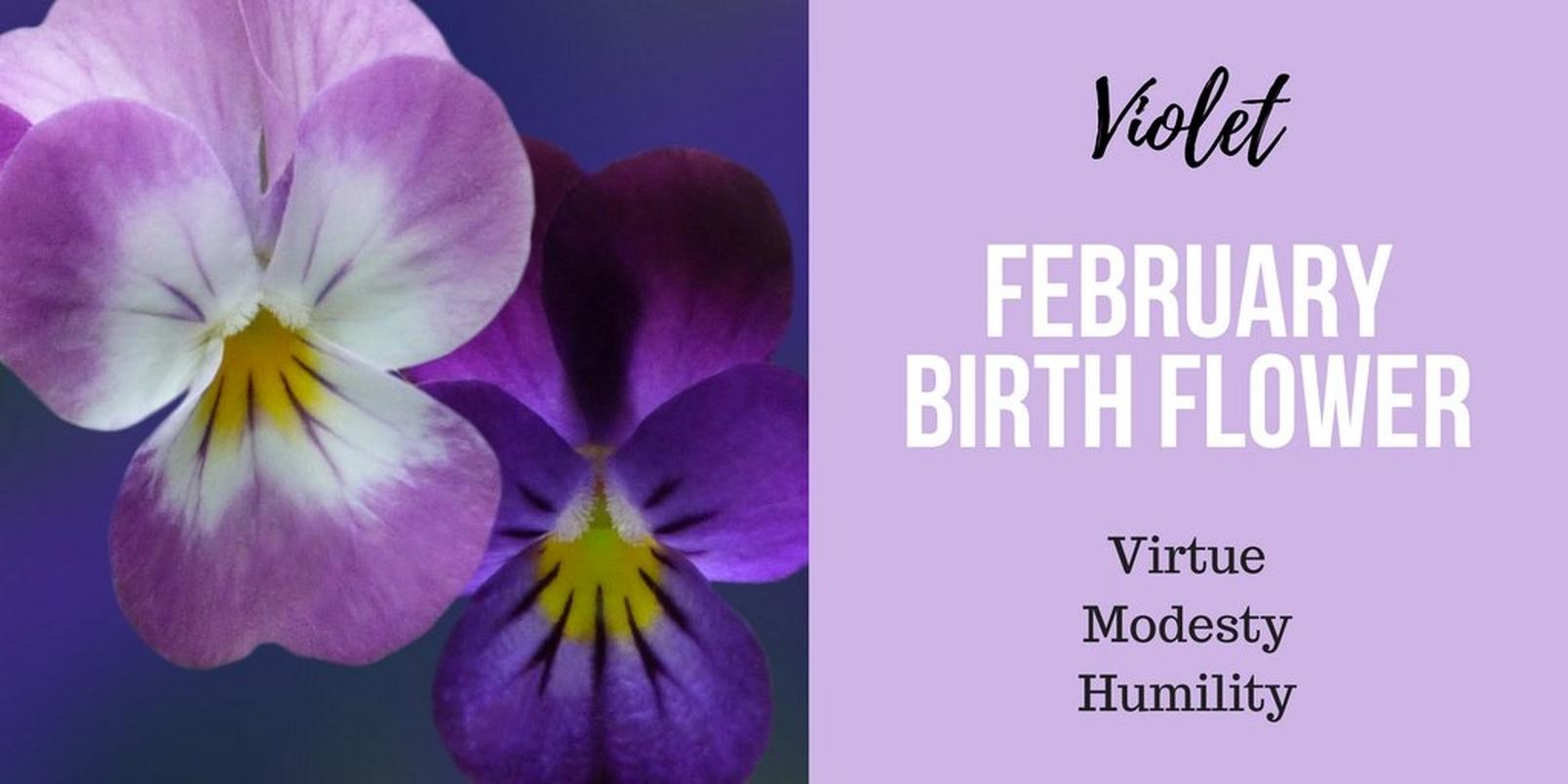 No flower embodies spring quite like the daffodil, so it’s quite appropriate that March’s birth flower is the narcissus. These cheerful yellow flowers are named after the character in Greek mythology who was so in love with himself he drowned in a pool of water whilst admiring his own reflection.

Narcissi aren’t just a symbol of vanity though, they are said to symbolise new beginnings, rebirth and rejuvenation. They also represent faithfulness due to their ability to bloom year after year.

For different cultures around the world daffodils represent different things. In China they are seen as a sign of good luck and prosperity because they bloom around the time of Chinese New Year. In Wales they are celebrated as the national flower. The daffodil is also a symbol for the cancer care charity Marie Curie. 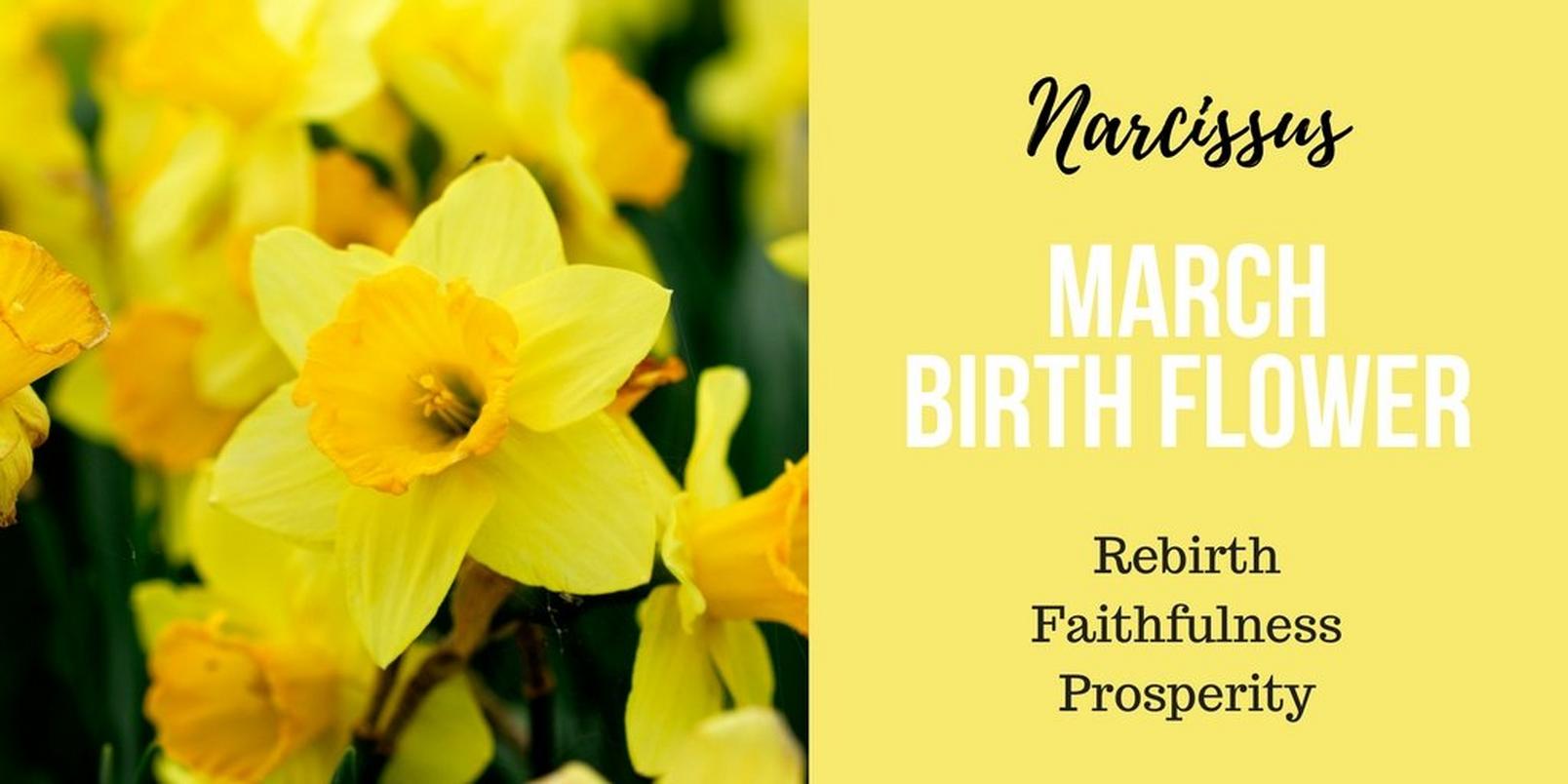 April’s birth flower is the daisy. This humble flower carries associations of purity, innocence and loyal love (remember the popular childhood saying ‘he loves me, he loves me not’?) It is also said to represent fertility and motherhood – the reason why it is commonly gifted to new mothers.

The name daisy is derived from ‘day’s eye’ and is so called because the flower closes at night and opens in the morning when the sun rises. This is also where the phrase ‘fresh as a daisy’ comes from.

While daisies are more popular in flower chains than vases, a bouquet of colourful gerbera daisies makes a wonderful surprise for someone with an April birthday. 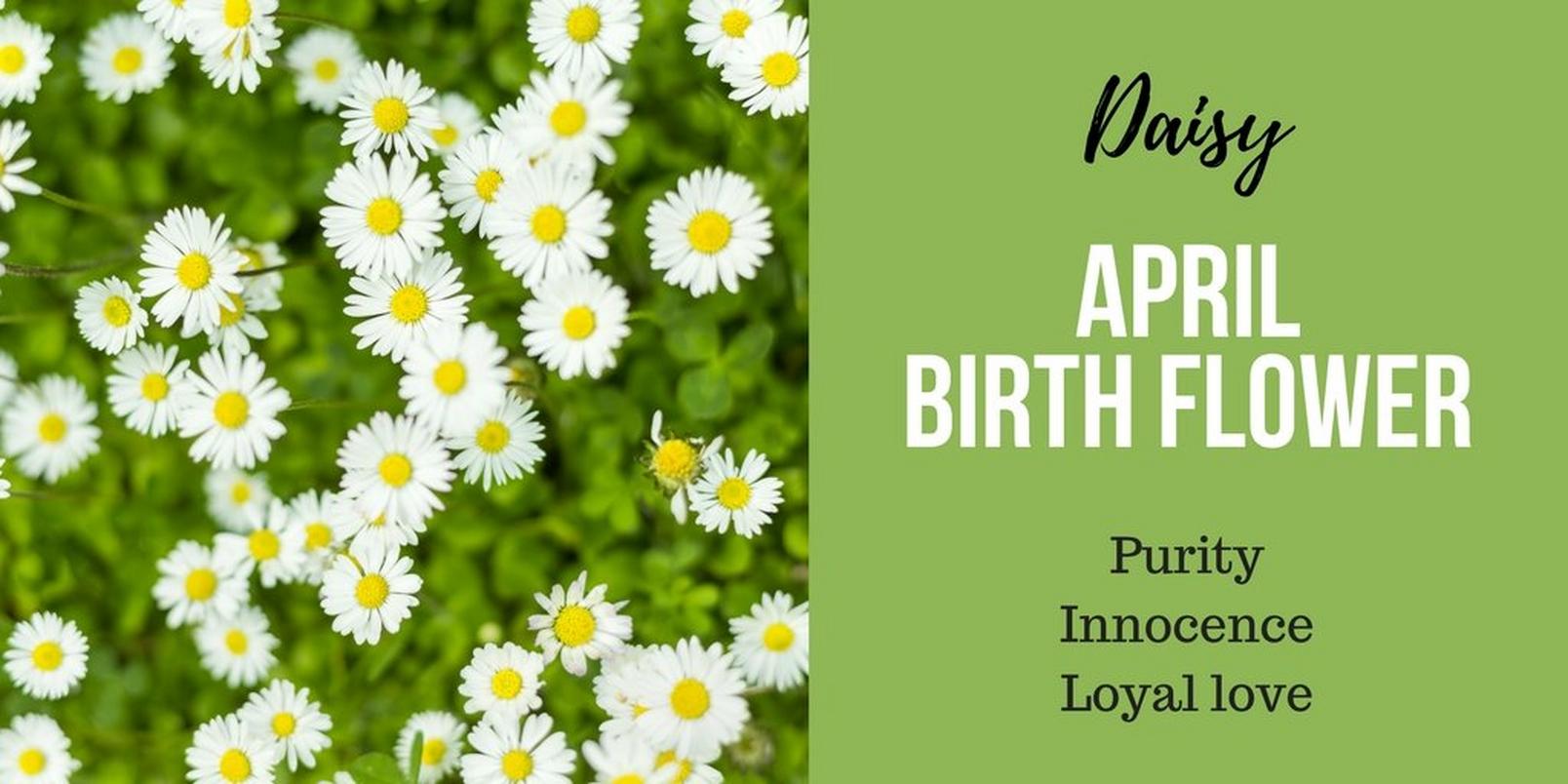 Those lucky enough to have been born in May can claim the exquisite Lily of the Valley as their birth flower.

A favourite of royal brides, this elegant flower has dainty bell-like flowers and a beautiful sweet fragrance. The fact that they only bloom for a short season (typically from March to May) adds to their exclusivity and appeal.

May’s birth flower is said to represent purity, humility and sweetness. According to the Victorian language of flowers, Lily of the Valley also symbolises a ‘return to happiness’. 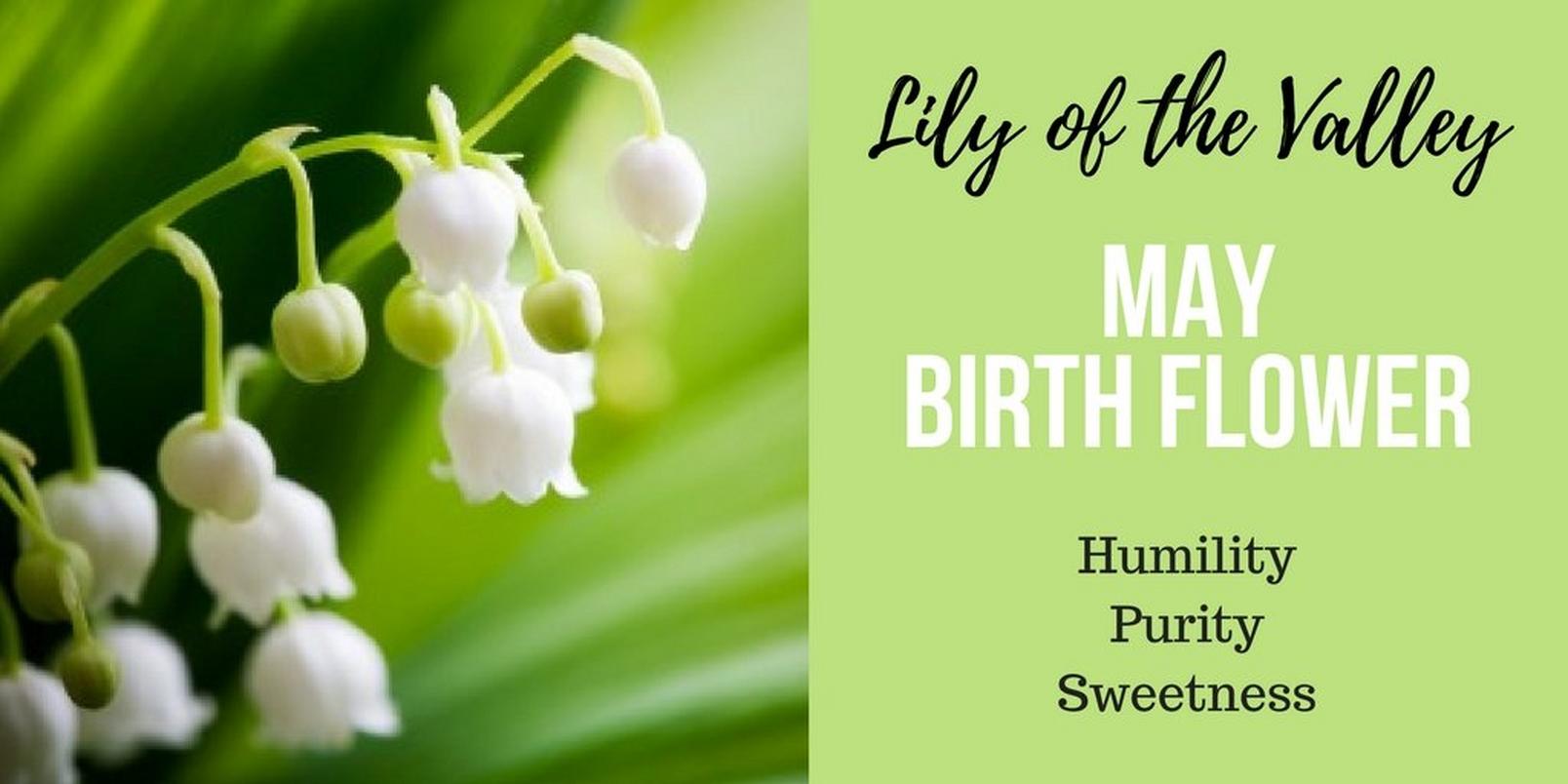 June birthdays belong to one of the most popular flowers of all time – the rose.

Roses have been cherished for their classic beauty and fine fragrance for centuries. The ancient Greeks and Romans identified roses with love and passion beginning with their association with the goddesses Aphrodite, Isis and Venus.

The meaning of the rose depends on its colour, though generally roses are said to represent love, beauty and honour. You can also use roses to communicate different feelings depending on the number you choose to give. A single red rose for example means new love or love at first sight whereas a dozen red roses carries the message of 'I love you'. 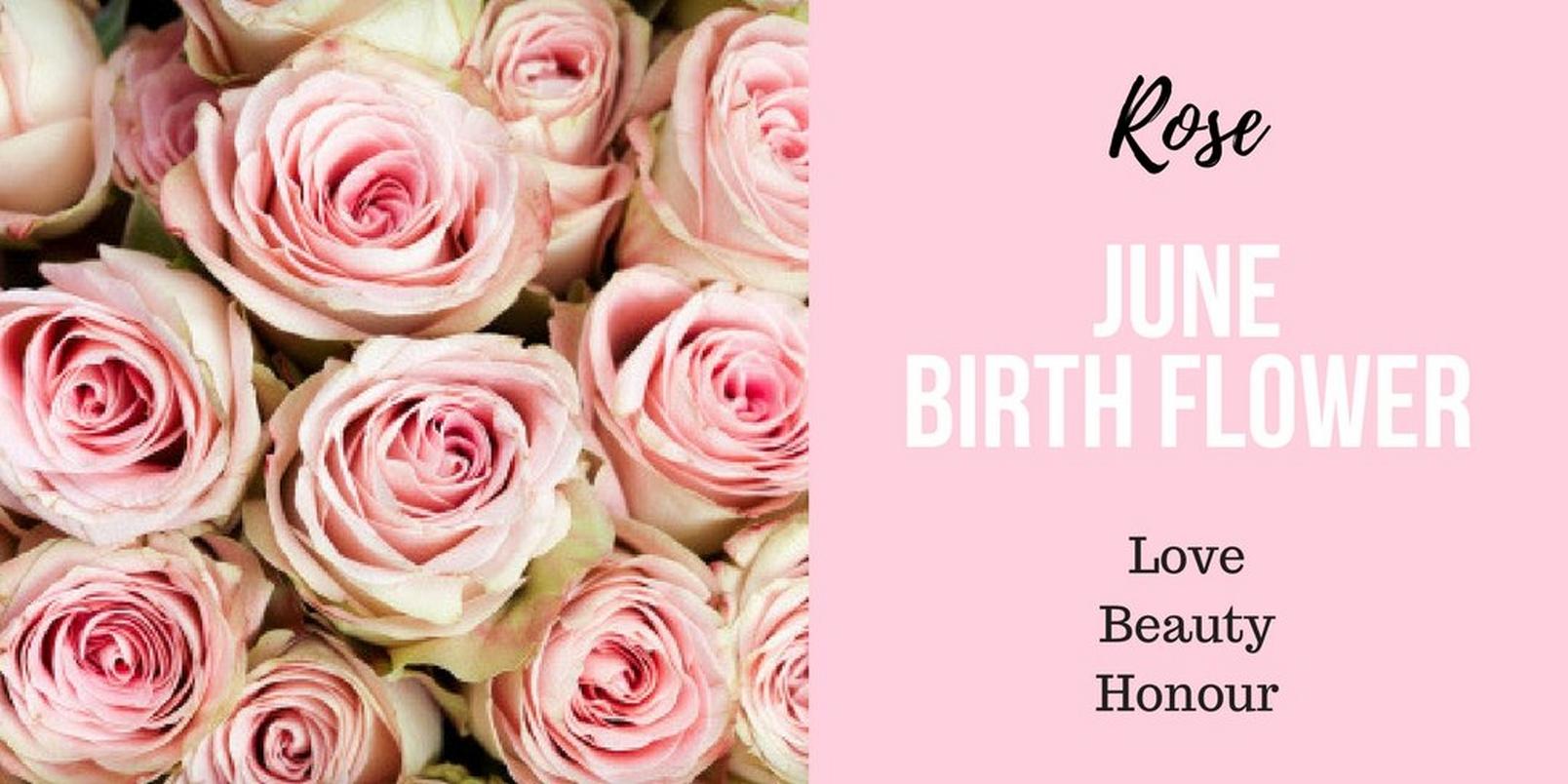 With their symbolic associations of positivity and dignity delphiniums are a generous tribute to loved ones with a July birthday. This cottage garden classic is a quintessentially British summer bloom and one of the few true blue flowers.

Like the rose, the delphinium is another flower that’s meaning varies from colour to colour. In general though it is said to signify an open heart, a trait said to be shared with those who celebrate a July birthday. 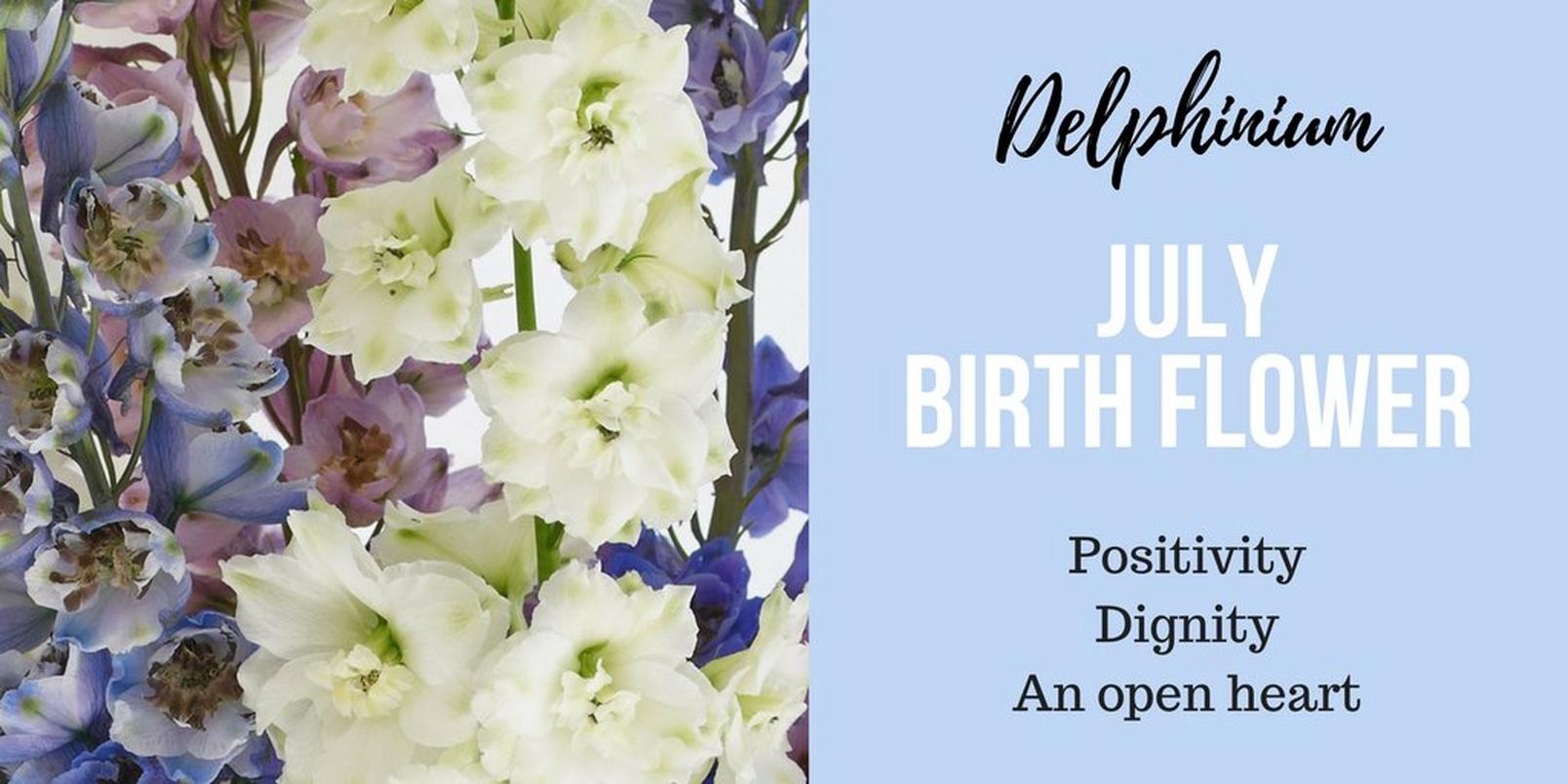 The August birth flower is the gladiolus. This striking bloom is characterised by pointed tips and dramatic stalks of flowers. It’s an incredibly popular late-summer flower and is available in a wide range of colours.

August’s birth flower gets its name from the Latin ‘gladius’, meaning ‘sword’, which is why you may have heard it called ‘sword-lily’. The name in fact is a reference to the sword-swinging gladiators of ancient Rome. Back then, when gladiators literally fought to the death in the arena, the victor was showered in gladioli. It is for this reason that gladioli are said to embody strength, generosity and moral integrity.

A bouquet of gorgeous gladioli makes a wonderful tribute to a loved one celebrating a high-summer birthday. 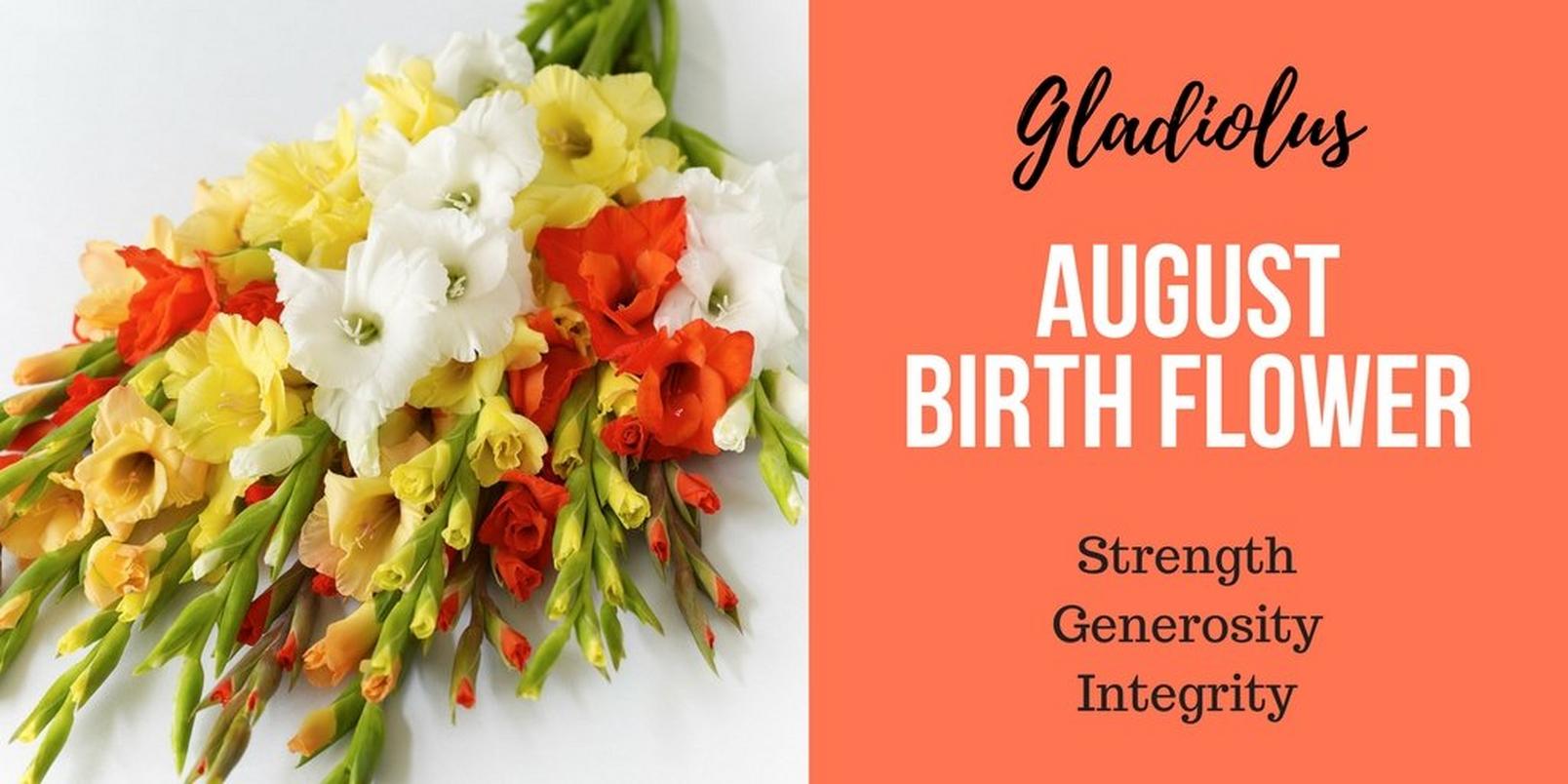 September’s birth flower is the aster which is said to represent both love and daintiness. The flowers are also associated with wisdom, valour and faith, making them a great choice for dear friends and family members.

Reminiscent of a daisy, the aster is named after the Greek word for ‘star’ and, if you look at the shape of the flower, it’s clear to see why.

These delightful flowers bloom all year round and are one of the most vibrant in the autumn months, making them the perfect choice for a September birthday. 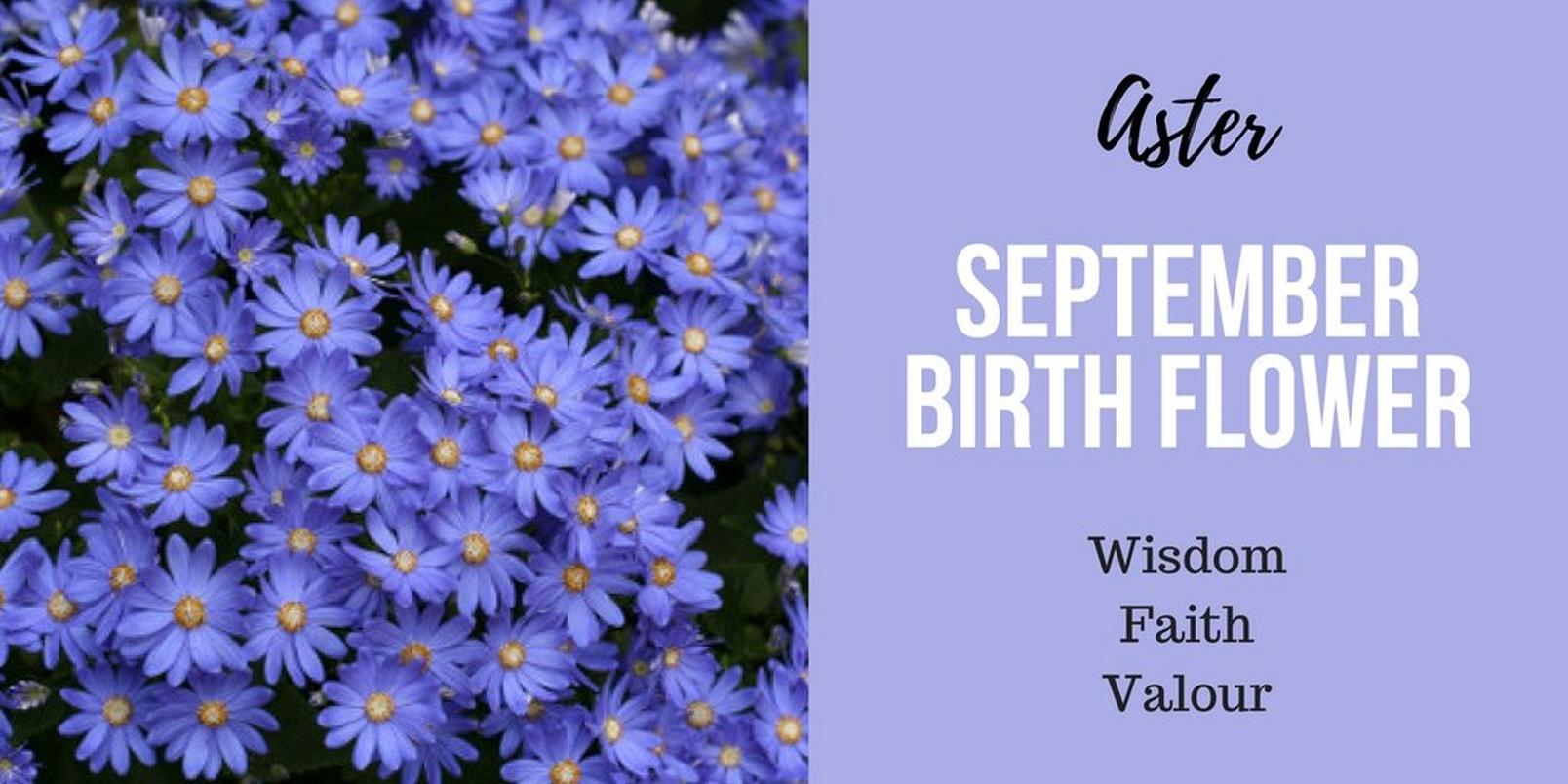 The marigold is the birth flower for October.

With their golden blooms and spicy scent, marigolds are a favourite with many keen gardeners. As one of autumn’s hardiest flowers, the marigold is said to represent a stubborn determination to succeed.

If your birthday is in October, you’re probably driven, passionate and creative – just like your birth flower. 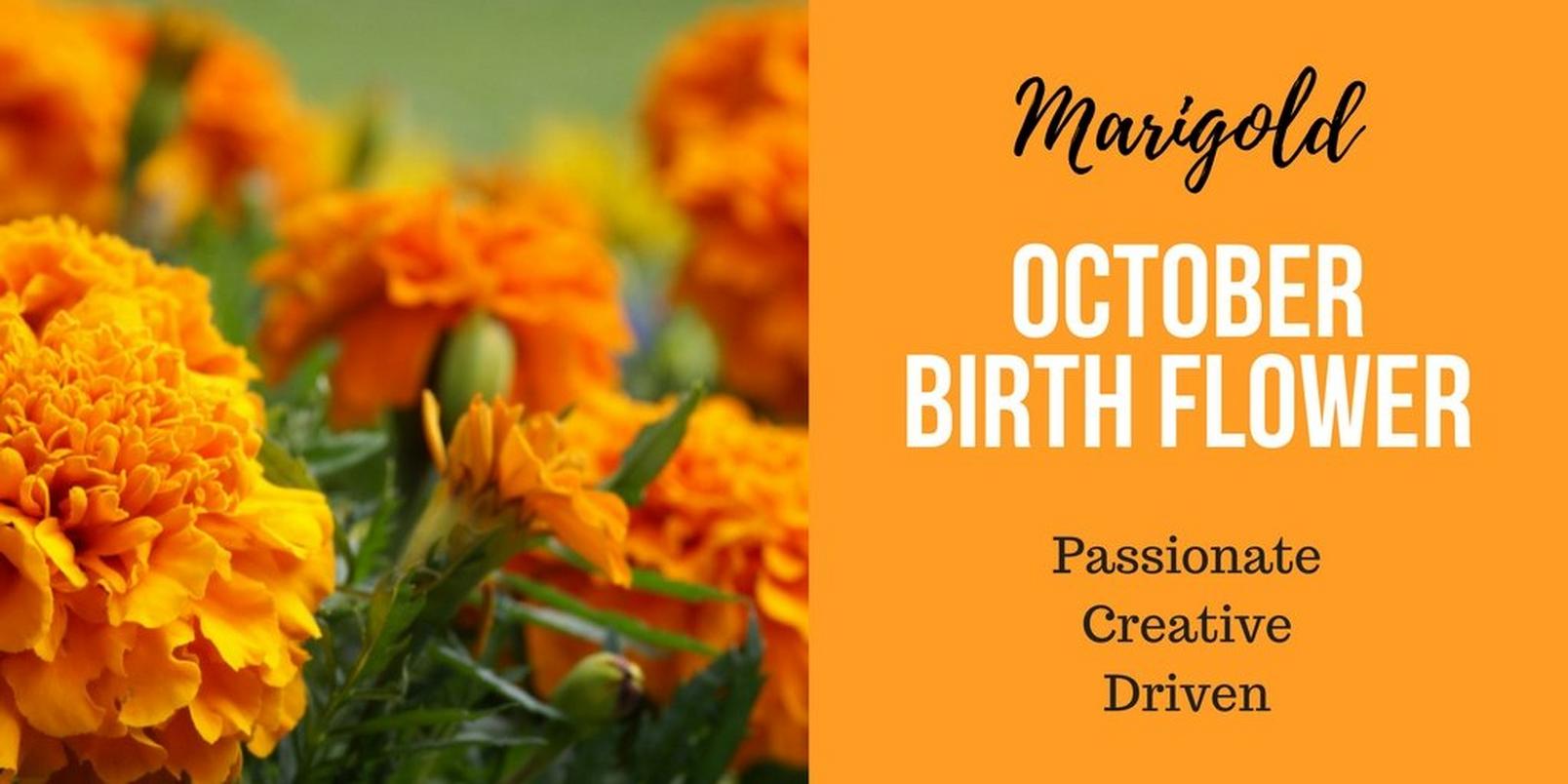 A November birthday just begs to be celebrated with a bouquet of chrysanthemums – this month’s birth flower.

First cultivated in China in the 15th century BC, the chrysanthemum has a long and fascinating history. Today it is one of the world’s most popular cut-flowers, owing to its variety and versatility.

Chrysanthemums come in a whole host of different colours, each one with their own symbolic meaning. Typically though, November’s birth flower represents friendship and well-wishing. Chrysanthemums are also thought to bring good luck and joy into the home.

In Japan, the flower is so revered it has a special day dedicated to its honour. Chrysanthemum Day, also known as the Festival of Happiness, is celebrated on 9th September annually. 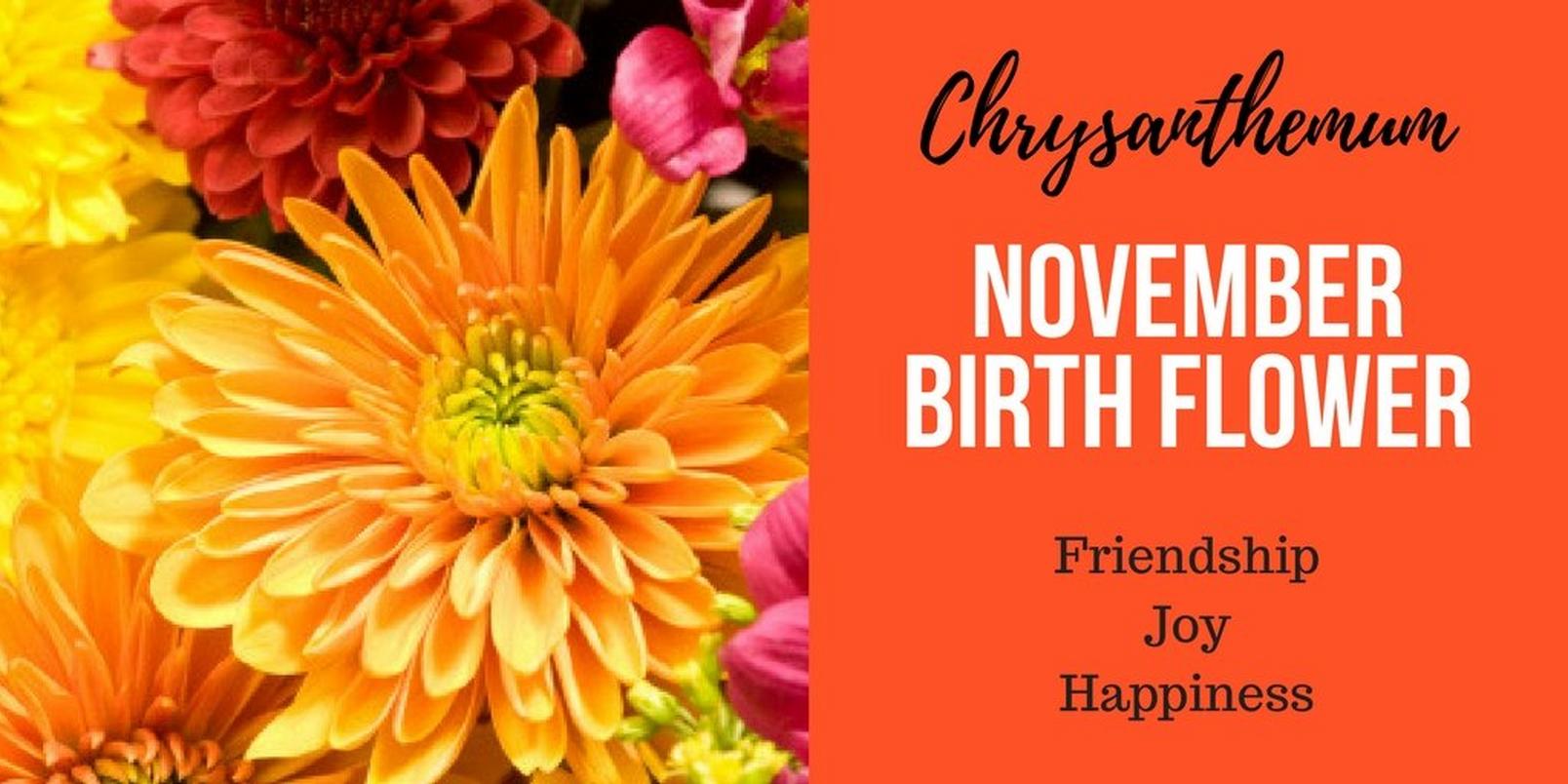 A real symbol of the season, it’s no surprise that the holly is the birth flower for December. Though technically a foliage and not a flower, the glossy green leaves and bright red berries of the holly are synonymous with Christmas spirit and so an apt choice for celebrating a December birthday.

In terms of symbolism, the holly has always had powerful connotations. In Pagan times it was seen as not only a symbol of fertility but as an effective charm to ward off witches and ill fortune. For Christians the thorny foliage and blood-red berries make the holly a symbol of the suffering of Jesus Christ.

If you'd like to add a personal touch to your flowers you can write a birthday message. Have a look at our guide to the best and most original birthday messages and quotes. 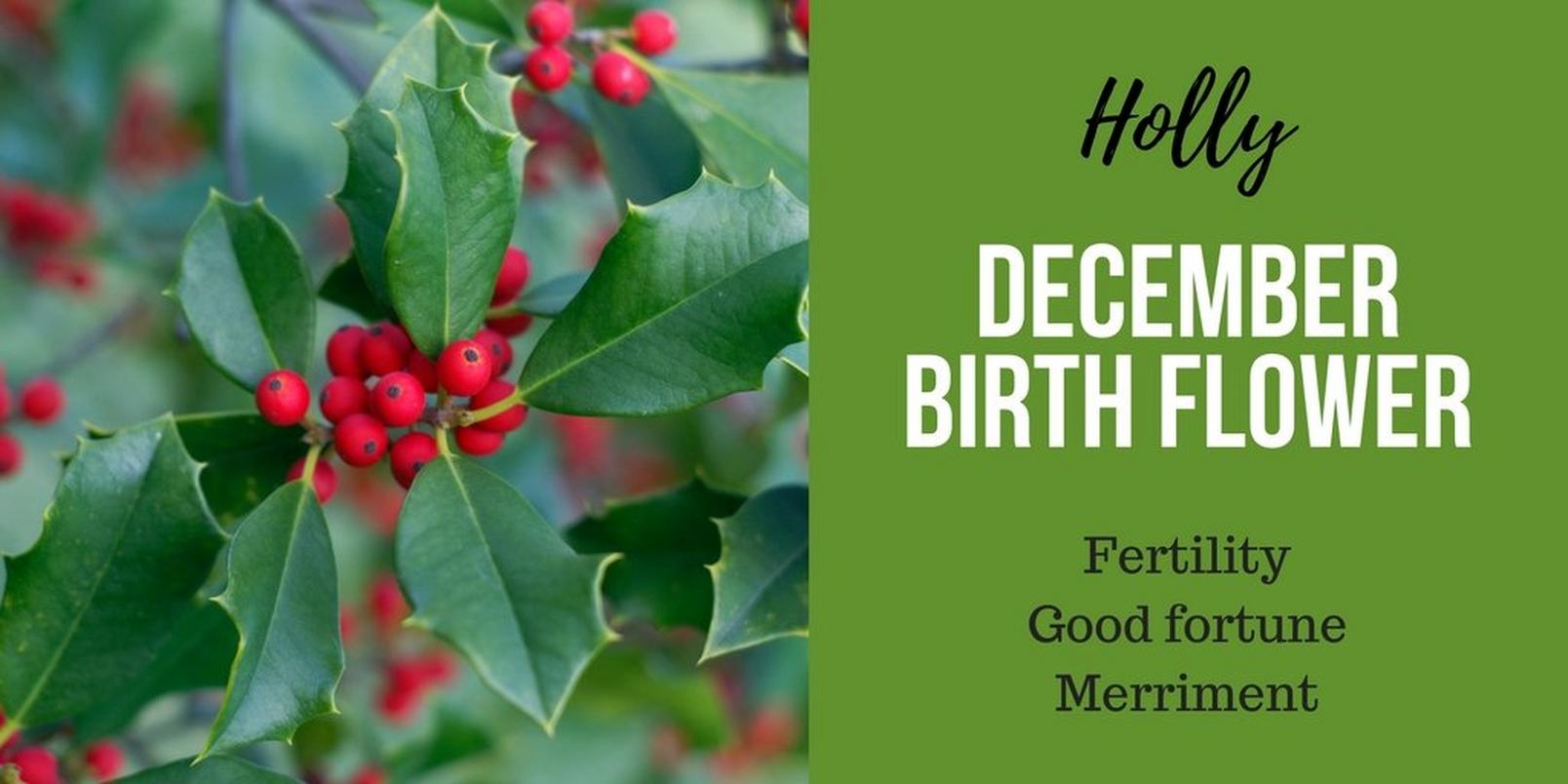